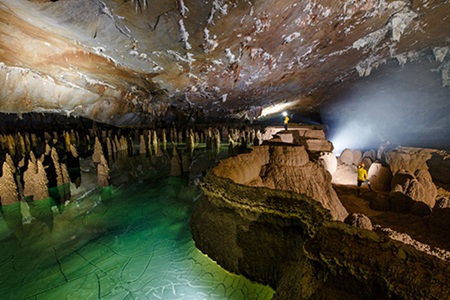 The company will launch the new route in a few days.

It will organise a two-day trip to Va Cave per week in July and August for up to eight persons per tour. In the coming years, up to three Va Cave tours a week between February and August will be organised, drawing about 750 visitors annually.

The new route includes a 10km trek. On reaching the cave, the tourists will wade through a 500m-long stream in a dark cave, with a maximum water depth of 1m.

The company said the tourists would get a chance to see beautiful stalactites and stalagmites.

Especially at Va Cave, the stalactites have formed around hard objects such as pieces of wood and sand at the bottom of the lake. The calcium from the water covers these hard substances, and over time, the stalactites become larger.

The Va and Nuoc Nut caves have the same water source as the Son Doong Cave, which has been recognised as the largest cave in the world.

The Va and Nuoc Nut caves were examined in 2000 by the British Caving Association.

In the first six months of the year, the province welcomed 1.7 million tourists, 293,000 of whom were foreigners.

Quang Binh Province was ranked eighth among the top 52 ideal destinations on the planet and the first in Asia in 2014, in a list published by the New York Times magazine.